some people have been gifted with a unique ability to experience and understand the unexplained .when it comes to exploring The Paranormal world but there are some souls who have dedicated their entire lives to understanding and communicating with the spirit world

some strange dreams or nightmares you experience for a while

Sometimes it comes and goes for a while and you forget about these things and sometimes it goes on for a long time and you feel like you need someone else’s help.

A Tantrik is someone who understands and is capable of engaging in paranormal activities. They are also capable of dealing with such situations and comprehending the astral world.

Moon and Ketu, especially when placed in the 5th, 8th, and 12th houses of the horoscope, or Moon and Ketu Kendra to each other.

this combination gives the psychic abilities and interest in exploring the mysteries of the other world or astral world.

Together, the moon and Ketu provide a unique ability and interest in understanding the unknown,

the moon which is a sense, emotions, and mind.

The moon functions as a sensor, picking up signals from other worlds. The Moon acquires the qualities of the planets with which it conjuncts.

It endows its inhabitants with psychic abilities and makes them masters of the healing arts, [natural remedies, tantric remedies, and healing people affected by evil spirits and ghosts.]

This intuition reflects psychic skills, as well as a source caught between the physical and astral planes, with the planet Moon acting as a sensor and processing unit for signals from the other world. This combination also implies that in a previous incarnation, one has worked hard to comprehend emotions and psychic talents.

However, if the Ascendant or ascendant lord is weak, or if this conjunction is afflicted in any other way, this yoga will make the person feel depressed and unhappy.

Now, I am going to talk about the horoscopes of individuals who are involved in ‘Poltergeist activities’, and what are the combinations in their horoscopes that allow them to work and understand it in a paranormal context. 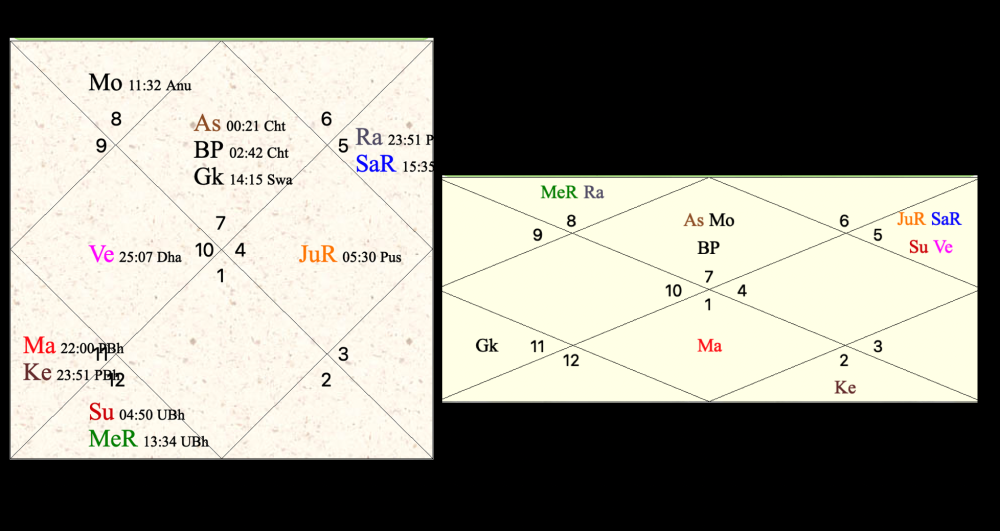 10th lord Moon in 2nd house and in Scorpio,

Scorpio is a very intense sign; if the moon is ‘Kendra’ to Mars, it gives them courage; otherwise, who likes to interact with ghosts or something similar? Navamsa, the moon, and Mars are also in the 1-7 axis, and Ketu is in the 8th house, the house of past lives, the bridge between life and death.

We can also see that the malefic planets Mars, Shani, Rahu, and Ketu are Kendras to each other and that this pattern repeats in the Navamsa chart.

8th lord Venus in a Dhanista nakshatra and its lord mars placed  in 5th house the house of your past Sanchit karma .in this chart  placement of planets mars   give some unique ability to understand to unknown

And mercury enters the Scorpio sign in Navmansa, indicating understanding and the art of communicating with the unknown. The position of the planets and their mutual relationship indicates a particular pattern of actions.

This person acts as a trans medium, performing Tantric Kriya or Remedy for those who are afflicted by ghosts and demons.

[Tantra (Sanskrit: तन्त्र “weave” meaning continuity), tantrism or tantrism is the name for a number of traditions from Indian religions. These traditions are usually esoteric in their nature. … Tantra is derived from 2 words – “Tanoti” (Liberation of energy) and “Trayati” (Expansion of consciousness).] [Born on 31 January 1927, Lorraine Warren along with her husband Ed Warren is considered one of the best and most experienced paranormal investigators in the world. The film Conjuring and Annabel is based on her extraordinary work. Moon the 12th lord in the 5th house, and the twelfth house, in the sense of astral world, dreams, separation, intuition and in Sagittarius sign’s lord of Jupiter in the 7th house together with the 10th lord Venus not only gives her success in this field. Also, make her the most famous paranormal investigator. she always acted as a trance medium between the spirit and the living being

It represents intuition, psychic abilities, and, most importantly, the source who is trapped between the physical and astral realms. Moon along with mars receiving aspects of Saturn she had admitted many times that things used to chase her down while returning from the Haunted location especially The Amityville case something from that place has haunted her and given her nightmares for a lifetime.

The alignment of the planets creates a unique individual personality and provides some glimpse into the karma or karma to be accomplished in this life.