Sun in Taurus from 15th May to 15th June (Transit)

As the Sun progresses across the zodiac and into new constellations, we observe shifts in the seasons as well as other phenomena that are influenced by the Sun.

The transit has an effect on both our mind and our body and is responsible for a certain type of phenomenon, including the way it impacts society and the country as well as the way it affects each of us personally according to the placements of our planets. By having this knowledge, you will be able to comprehend that we are signalling a specific order of occurrences.

The position of the Sun in a birth chart is a representation of the individual’s self-assurance, vigour, aspirations, and status in life.

The glimpse of Sun Sankranti

As a celestial luminary, the Sun is able to illuminate the entire planet. The Sun is the driving force behind everything; it is the source of life. What happens to your demeanour depends on the intensity of the energy that flows through your body. In Vedic astrology, the Sun is seen as the soul.

According to Mundane astrology, the changing of the seasons, the activities of governments, and the collective human lives as well as the weather, environment, earthquakes, and other such phenomena are indicators of the type of change that is taking place in the world. Let’s observe the ways in which the path of the Sun will bring about changes in the climate, agricultural practices, and economic conditions.

Therefore, the Sun will be transiting through the sign of Kritika from the 15th to the 25th of May. Heat waves are common during this time of year because the Sun has its own Nakshatra. However, Jupiter and Venus in Pisces have caused pre-monsoon rain, which helps lessen the temperature and indicates that the monsoon will arrive on time.

The Sun will reside in Rohini Nakshatra from May 26 to June 7.

Venus will travel to Aswini Nakshatra in Aries, but Mars will move to Uttar Bhadrapada Nakshatra in Pisces. Saturn will aspect Venus and the Moon, while Mercury will be direct. All of these planetary combinations indicate an economic downturn, and the stock market shows no indications of revival.

The sun represents the government, and its position indicates the government’s troubles, including difficulty in implementing certain rules and regulations for the governments of India, various other countries, and some states, as well as a financial crisis similar to the one Sri Lanka is experiencing at present.

From the 8th through the 15th of June, the Sun will remain in the Mrigshira Nakshatra.

The planet Saturn will enter its retrograde phase, which will bring issues that have not been resolved to the forefront. Because Saturn is currently located in the Dhanishta Nakshatra zodiac sign, it is likely that there will be no relief in the price of oil and gas, in addition to turbulence in the stock market. A state of conflict would still be hanging over the heads of humanity.

What will be the rainfall in the Summer of 2022?

There is a strong possibility that people’s belongings and crops will be harmed as a result of heavy rainfall and storms.

The horoscope cast at the time of the Sun’s entry into the Zodiac has provided some indication of social, political, and economic events coming month

In Astro meteorology the study of the solar and lunar charts along with the Sun’s entry into Ardra Nakshatra chart is done for forecasting rains during June to September which is the South-West monsoon season in India. The first chart which is studied in monsoon forecasting is Sun’s entry into Taurus i.e. Vrishabha Sankranti Kundali. Sun enters into Taurus around the 15th of May every year. As per Brihat Samhita’s Sasya Jataka Adhyay, chapter number 39 the horoscope cast for Sun’s entry into Taurus gives an indication about crops sown during the summer season and harvested in winters which at present are known as Kharif or Monsoon crops. 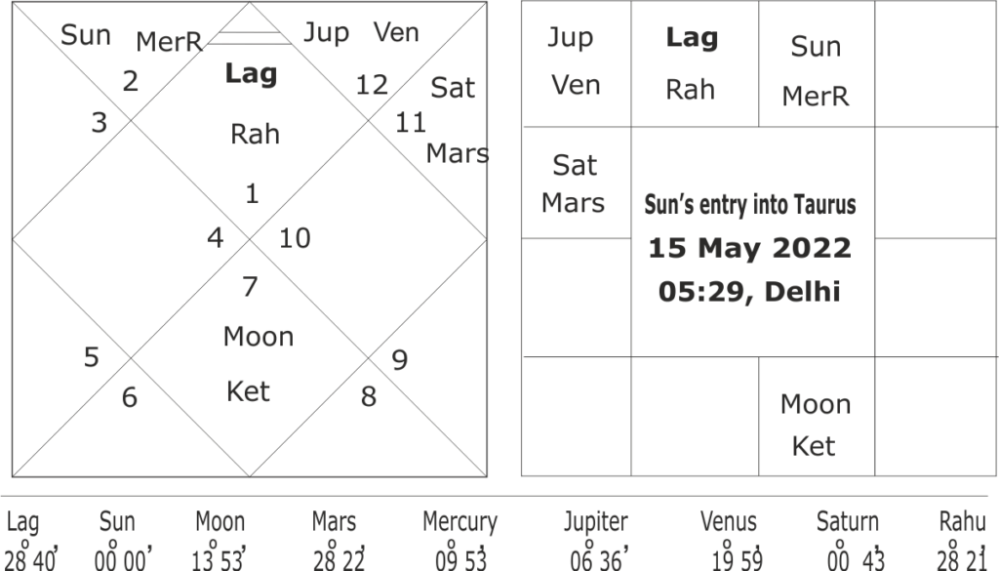