Skip to content
In Mundane astrology (Medini Jyotish) the solar ingress of movable sign hold a very prominent importance. The horoscope cast for the time of Sun’s entry into movable rashi’s Aries, Cancer, Libra and Capricorn gives indications for the coming  6 months. These four solar ingress charts along with the Hindu New Year horoscope gives valuable clues about the major events that are likely to occur in the year under consideration. 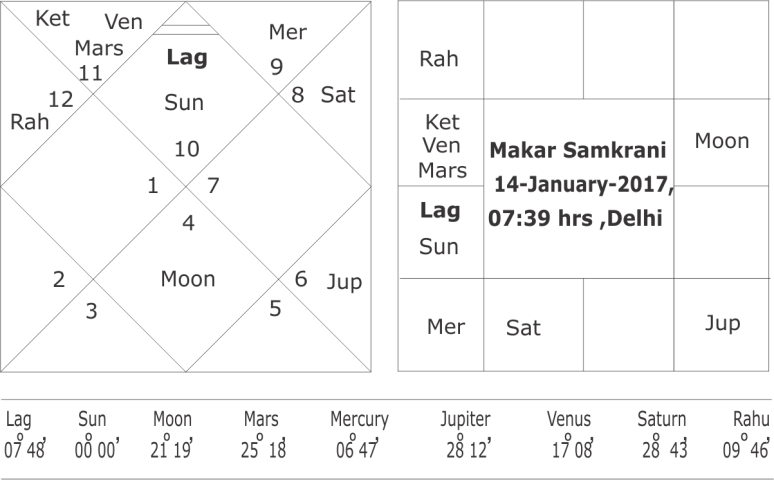 This year the Sun will enter into the Capricorn (Makar) sign on 14th of January at 07:48 hours as per Indian Standard Time. The horoscope cast for that time by taking the place as Delhi will give astrological indications for the coming 6 months for India.
1. In the Makar Samkrani chart the rising Sign Capricorn (Makar) is receiving the strong aspects from Saturn, Jupiter and Moon.
2. The lagna lord giving aspect to its own sign along with benefices like Jupiter and Moon shows that this year the harvest will be good for the farmers. The people in general will remain happy.
3. The exchange between the 2nd lord Saturn and 11th lord Mars shows that the coming budget will be a ‘favourable budget’ for common man and industry. The economic slow down after the demonetization will  be overcome by the progress of stock market and economy after a  favorable budge by the central government.
4. The exchange of houses between the 9th lord Mercury and 12th lord Jupiter is a combination for foreign investments. In the next 3 months government will make new policies to increase the volume of investments in the country.
5. The affliction to the 8th house by the placement of Rahu and the aspects of Mars and Saturn shows the accidents of rail, fire and some terrorist attacks causing mass deaths in the coming 3 months on serious notes.
6. In Navamsha of Makar Samkrani chart the placements of benefic planets shows all around prosperity and growth in economy.

9. So the Indian economy may continue to struggle for next three months despite all the favorable economic measures taken by the central government in the coming union budget.

Investor’s should be careful while making big investments in the stock market.

I have done B.com, L.L.B. and Jyotish Acharya. I am a stock market investor and Vedic astrologer by profession. You can consult me for a professional horoscope reading and astrological remedies.

My you tube channel