In the modern  society the success in career has become the most important concern for almost everyone. The materialistic world in which we are living-in judge people from the amount of success and achievements in their profession. Astrologically we can judge the professional growth from many aspects in a horoscope. Although the 10th house define the ‘Karma’ in general but we see the career from it apart from the 7th house (business) which is the 10th from the 10th house as per the ‘Bhavartha-Bhavam’ principal. Some important points to judge success or failure in career are given below.

. If the lagna and its lord is involve in good Raja Yoga’s then a native may get success in his chosen field of profession.

. If the 10th house/lord has P.A.C. (Position, aspect and conjunction) relation with the 2nd (wealth) , 11th (gains) , 5th (education) and/or 9th (luck) houses/lords then the native get very good timely opportunities for growth in his career.

. If the 7th house/lord is well connected with the 2nd, 11th, 5th and/or 9th houses/lords then native may do well in business.

. The Dhana Yogas  and the Raja Yogas are always helpful in getting success in career.

. A strong ‘Chandra Kundali’ and ‘Karakamsha Kundali’ is also required for higher growth in career.

. However, some bad yogas such as ‘Kemadruma Yoga’, ‘Shakata Yoga’, ‘Daridra Yogas’, ‘Dainya Yogas’ and some times a ‘Sanyasa Yogas’ may let down natives career growth which i will explain in my next post on this blog.

The Aquarius lagna horoscope given above is of a Gazetted officer working in the Indian Meteorological Department at New Delhi. In this horoscope the 10th lord Mars is conjoined with 4th and 9th lord Venus along with lagan lord Saturn is in excellent Raja Yoga. This Yoga become more powerful as it is in the 10th house from Moon. From the Moon it is the conjunction of lord of 4th and 10th houses. The 5th lord Mercury in the 2nd house is a very good Dhana Yoga here. The Moon and its depositor receiving the aspect of Jupiter is also a good Dhana Yoga.

The Sun which is the Karaka of government service is also very strong here. The Sun is in its sign of exaltation receiving the aspect of Jupiter from the 11th house of gains. He got his first job as a stenographer at the age of 23  years during the maha dasha of Sun  beginning from May 1995. Later the Sun dasha got him married with a teacher working in the government school. He got married in year 1999 during Sun-Mercury dasha. Since marriage he has enjoyed lots of prosperity and good growth in his career. He and his wife now both are doing well in their respective career in government service.

The dasha of Moon ( from May 2001 to May 2011) in Kemadruma yoga was just average for him. Later the  Mars dasha starting from May 2011 gave him promotion. The position of Mars is strong in both Rashi and Navamsha charts. 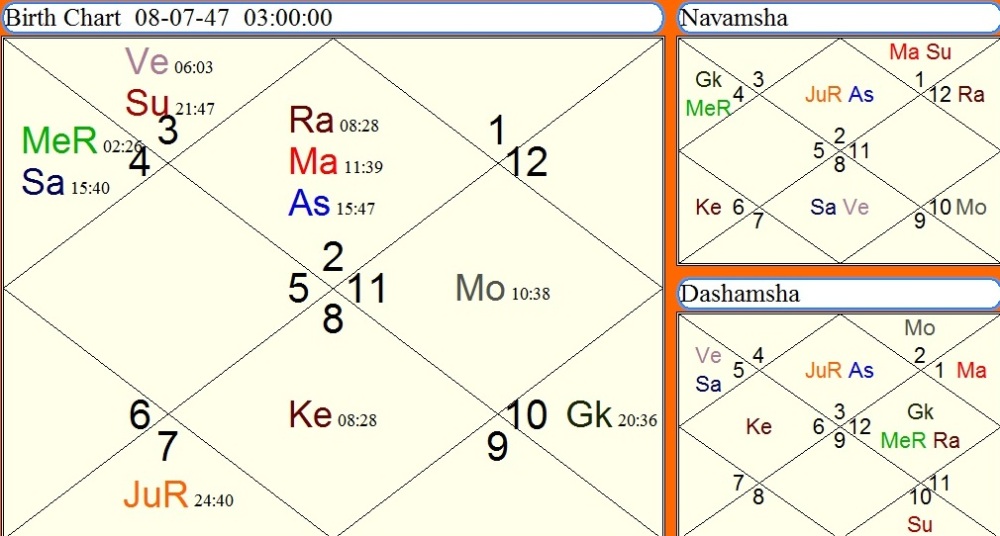 The  taurus lagna chart given above is of a successful business man. He was a  contractor  and had possessed lots of land and property ,  as we can see lagna lord in 2nd house associate with 4th lord Sun getting an aspect from Jupiter . In the Rashi chart Moon is in the  10 house also getting aspect from Jupiter.

The 10th lord Saturn associate with 5th and 2nd lord Mercury . The Mercury the karaka of business and  Saturn the karka of land gave him a career in construction.  In Dashamsha chart there is a good exchange between lagan lord Mercury and 10th lord Jupiter. The Raja Yogas and Dhana Yogas present in the chart gave him a successful career.