After the high voltage drama in Karnataka the BJP got defeated in its own game by the Congress party which now looks rejuvenated under the smart leadership of Rahul Gandhi. The Congress party learning from the mistakes it had committed in Goa and Manipur last year this time didn’t given an inch to BJP for grabbing power in Karnataka. We can see this clearly in the horoscope of Congress party in which dasha of Jupiter-Venus is running in Vimshottari showing the grit to fight. Venus as the lord of 3rd house in the 10th shows swift action and articulate efforts. As per Sage Parashara the Venus is a functional malefic for Pisces (Meena) lagan chart. Thus its dasha will not take Congress back into the power in center when the elections will happen in 2019 though its performance will surely improve a lot. The political rise of Congress will start from 2020 during its Jupiter-Sun in Vimshottari and the Chara dasha of Virgo. 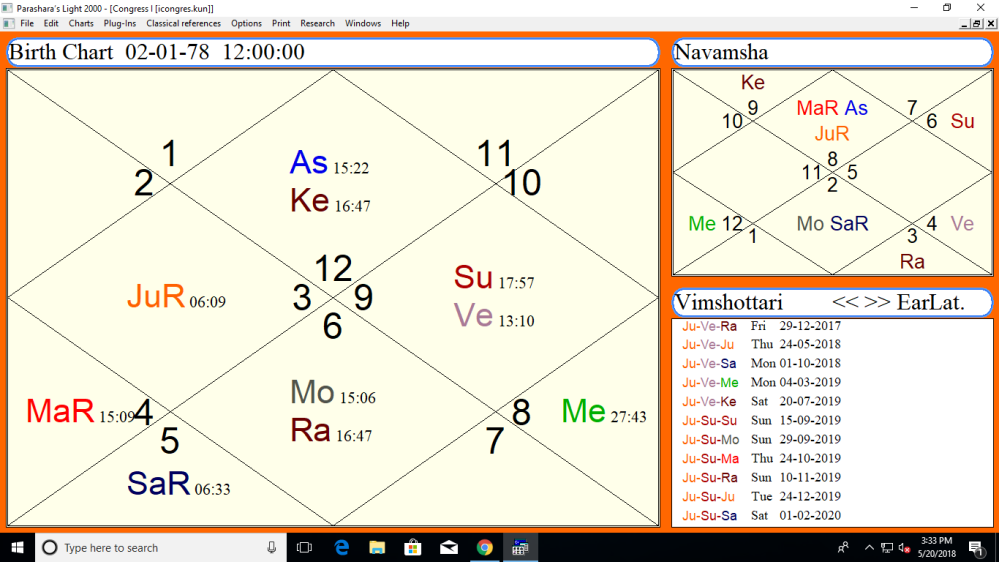 The BJP will also not let Congress-JDS alliance work smoothly and it will try to create deflections in the MLA’s of both parties. As per the foundation horoscope of India the dasha of Moon-Rahu till August 2018 shows confusions in the mind of general public and communal tensions in the country. Later the Moon-Jupiter period shows the growth in economy and political conspiracies as Jupiter as the 8th lord is in the 6th house of disputes. In transit the Saturn is moving in Sagittarius the 8th house and Mars is in Capricorn the 9th house in foundation chart of India showing the same concern. The religious disputes and political plots will trouble the BJP led government in center. 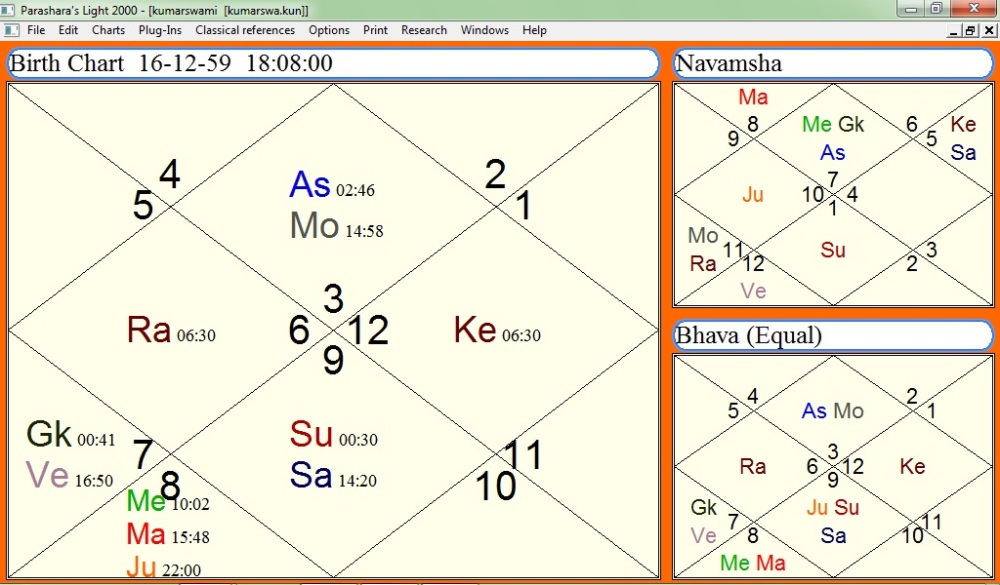 The horoscope of HD Kumarswamy is of Gemini lagan. He was born on 16 December 1958, 18:08 hours at Mysore. In his horoscope the 7th house of partnership and marriage is very bad with the presence of Sun and Saturn in it. He married second time without giving divorce to his first wife in violation of Hindu Marriage act 1955. A PIL in this matter was filed which was later dismissed after his first wife intervened in the favor of her husband.

The Chiddra dasha of Mercury-Saturn is till 27 September 2018. Later Ketu dasha will come which is in the 10th house of power. In Ketu-Venus dasha in 2019 he will work for the welfare of poor people specially for women. The Ketu-Sun dasha and Ketu-Moon dasha will trouble him after April 2020. The transiting Saturn and Jupiter in the 8th from his natal Moon can force him to resign from his post then. The BJP will create lots of troubles for Kumarswamy government in days to come.