The planet Jupiter in Vedic astrology has a great significance as it is an auspicious planet that makes the people rich , gives commanding voice, spiritual educated, culture, liberal and generous. But this is a good aspect of Jupiter, it also has another form. It can also make you arrogant, cocky and fatty if it goes bad in a horoscope. At the one hand it makes you generous and other hand it makes you unprincipled, all depend upon placement of Jupiter and conjunction of other planet on native chart.

Jupiter the karaka of abundance ,obesity also makes you lazy person want to eat a lot .

The planet Jupiter is anonymously  called Guru or Brihaspati . Planet has got a great role in the life of human being the planet is said to be highly spiritual it is the symbol of devotion worship and prayer.

Jupiter closely connected to the kids and wealth that is why it is called the significant of the children and wealth.

luck and good fortune are associated with Jupiter for good reason.

This is a kind and benevolent planet one that want us to grow and flourish in a positive way Jupiter maybe judge and jury but it’s mostly an honorable helpmate that we are on the right path while our success accomplishment and prosperity are all within Jupiter realms. Jupiter is also associated with weight gain. This is also a signification of fat and pulp .

Example :- Jupiter is in watery sign placed in lagna Probability are high that native over wait and he/she may put an extra effort to loose only tiny amount of weight .

as we see that Jupiter in lagan in watery sign lagna lord also in cancer throughout her life she has been overweight.

As we see Roger Federer  6th house very strong makes native mentally tough. Jupiter Mercury and  Mars all gives strength to 6th house in the birth chart of Roger Federer given here. He is regarded as the best tennis player of all time. 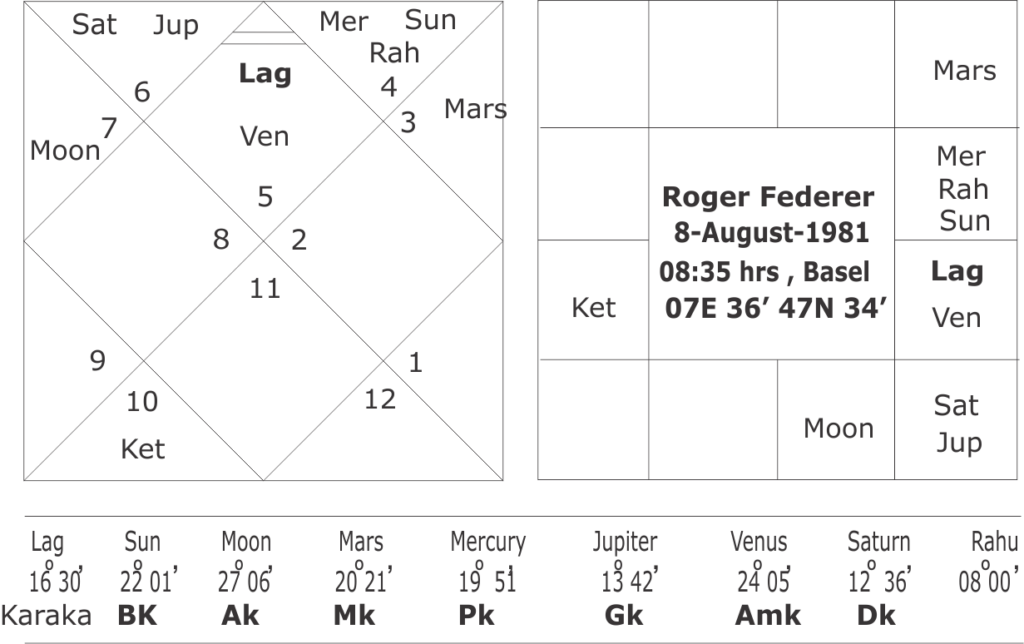 Example 3:- The 6th lord Jupiter along with Mars and  lagnesh Moon in 6th house no need to explanation who he is . Sachin Tendulkar became the God of India cricket with the help from strong 6th house and Jupiter in his chart. Because Jupiter significant of expansion provide wisdom through  effected area if it is strong . 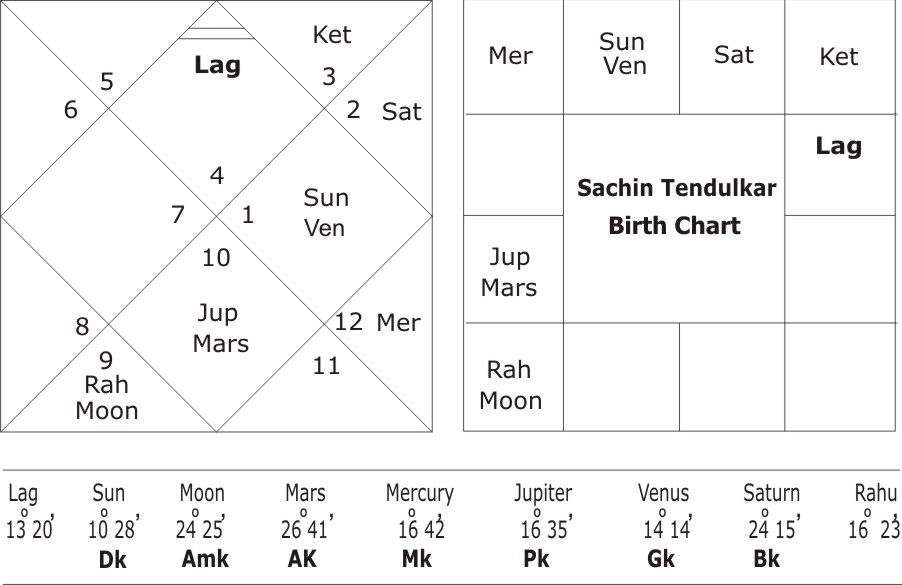 Jupiter like leisure time  to spend with family and friends ,has jolly nature whenever  it is associate with lagna,  4th house , 2nd  house and its  lord native attach with family and always like to spend time with them.

It takes Jupiter about 12 years two circle the zodiac it is masculine energy and rules both Sagittarius and Pisces and 9th  and 12th houses.

Thursday is assigned to the Brihaspati in the Shastra the people who have taken birth in the Sagittarius and Pisces zodiac sign are devoted decent and spiritual by nature since the ruling planet is Jupiter the people born with the influence of the Jupiter are beautiful and honest and have a tendency towards the welfare of the society.

The planet Jupiter can also be malefic when it is a debilitated afflicted by malefic planets like Saturn , Rahu,  Mars and combust with Sun this position of Jupiter can gives  one acute poverty.

The period of 16 year can be both malefic and benefic depend upon the power and strength of Jupiter planet if the Jupiter is exalted in the sign of Moon which is Cancer or  place in a friendly sign when it will be definitely bring health , happiness , harmony and money The social status Intelligence and health  and reputation as well.

The planet Jupiter also create Gajkesari yoga when it is posited in Kendra from the Moon the get Kesari yoga make the native powerful and it give gift of eloquent it make the native a public speaker if P.A.C connection with 2nd house . It also make Hansa  yoga when occupied Cancer sign or Sagittarius or Piscess and is in kentra and trikona (triangle from ascended )

When the planet guru conjoins with Rahu and Ketu that creates Guru- Chandal yoga which the devalue the power of Jupiter.

In medical terminology Jupiter is significator of  liver, kidneys, lungs and ears, diabetes etc ,whenever placement or conjunction with 6th and 8th lord and the running dasha not favorable the native may have suffer from above give diseases.