The state assembly elections in Uttar Pradesh are doing to be held from the 10th of February this year. The election results shall be announced on the 10th of March. Unlike last time this year, the context has become bipolar between BJP and Samajwadi Party. The opposition leader Akhilesh Yadav is giving a straight fight to BJP chief minister Yogi Adityanath. While Congress and BSP are also contesting but their organization is a bit weak at present. Let’s analyze the horoscopes of Akhilesh Yadav, Yogi Adityanath, Priyanka Gandhi, and Mayawati in the context of UP assembly polls in 2022.

who would be the most likely candidate

born 1 July 1973 I[His actual birth is 24 October 1972 which I have received through one of my astrologer friends]is an Indian politician and national president of the Samajwadi Party, who served as the 20th Chief Minister of Uttar Pradesh from 2012 to 2017. He is the youngest person, having assumed office on 15 March 2012 at the age of 38. took over the office. Yadav is the Member of Parliament for Azamgarh in the 17th Lok Sabha, being elected in 2019.

His first significant success in politics was being elected as a member of the Lok Sabha for the Kannauj constituency in 2000. He is the son of veteran politician Mulayam Singh Yadav, the founder-patron of the Samajwadi Party, who served as the Defense Minister. Government of India and three terms as Chief Minister of Uttar Pradesh.

Mr Akhilesh Yadav going through Jupiter- Venus -Mars Dasha during the election time Venus placed in the twelfth house but exchange with 12th Lord Sun, it gives a strength To Antar Dasha but Venus also in Sun Nakshatra it reduces the strength of Venus now let’s analyze the strength of Antardasha nath Venus in other varga charts.

Antardasha Nath Shukra has gained strength in Navansha and Dasamsa charts, this is a positive sign for him.

Mahadashnath Jupiter is in its own sign in the ascendant chart, exalted in Navamsa and own sing in Dasamsa chart, so there is strength in Jupiter,and also exchange in Jupiter Ketu nakshatra which gives the strength but the position of Pratyantar Dasha Nath Mars is weak in Lagna chart and is in hasta nakshatra the lord of it placed in 8th though mars gain in strength in navmesh  during the election indicating that

He may have to encounter opposition not only from the outside but even from within his own party when pointing out the pitfalls of the conspiracy, but he will do his best to overcome it. Ms. Mayavati

Mayawati (born 15 January 1956) is a politician and social reformer from India. She has served as the Chief Minister of Uttar Pradesh four times. She is the national president of the Bahujan Samaj Party (BSP), which promotes a social change platform for Bahujans, also known as Other Backward Castes, Scheduled Castes, and Scheduled Tribes, as well as converted minorities from these castes. She was chief minister from 1995 to 1997, again from 2002 to 2003, and again from 2007 to 2012.

If she has been the Chief Minister of Uttar Pradesh, then there should be strong ‘Raj Yoga’ in the chart and there should be Sihasan Yoga which is formed from the fourth house in the horoscope of a leader, will get the throne or not.

She was going through Saturn Magadha from 25 May 1994 to 25 May 2013 .4th and 9th lord Venus and Jupiter have mutual aspect create raj yoga and Sinhasan yoga

Saturn, Mars, and Rahu situated in the fifth house make the native stubborn and obstinate, Mars as the tenth lord along with Saturn the seventh lord, is also making another raj yoga in the 5th house. the 10th and seventh lord make the combination of promotion and attainment of position[This combination makes a person domineering]

Since Mercury’s Mahadasha began, she has begun to lose power because Mercury’s Dasha is not auspicious for Cancer ascendant and is also debilitated in the Dashmansha chart, despite the fact that Neech Bhang is also creating Raja Yoga. As a result, she is attempting to maintain her position by employing all of the’saam daam dand bhed.’

During the election time, her mer-Mars-Jup will going on mahadashanath mercury not powerful but the anterdasha and pratyanterdashanath Jupiter have strength

So this time better results can be expected from them than before.

Priyanka Gandhi Vadra, born 12 January 1972 is an Indian politician and the general secretary of the All India Congress Committee in charge of Uttar Pradesh. She is the daughter of Rajiv Gandhi and Sonia Gandhi, sister of Rahul Gandhi, and granddaughter of Feroze and Indira Gandhi, making her a member of the politically prominent Nehru-Gandhi family. She is also a trustee of the Rajiv Gandhi Foundation. 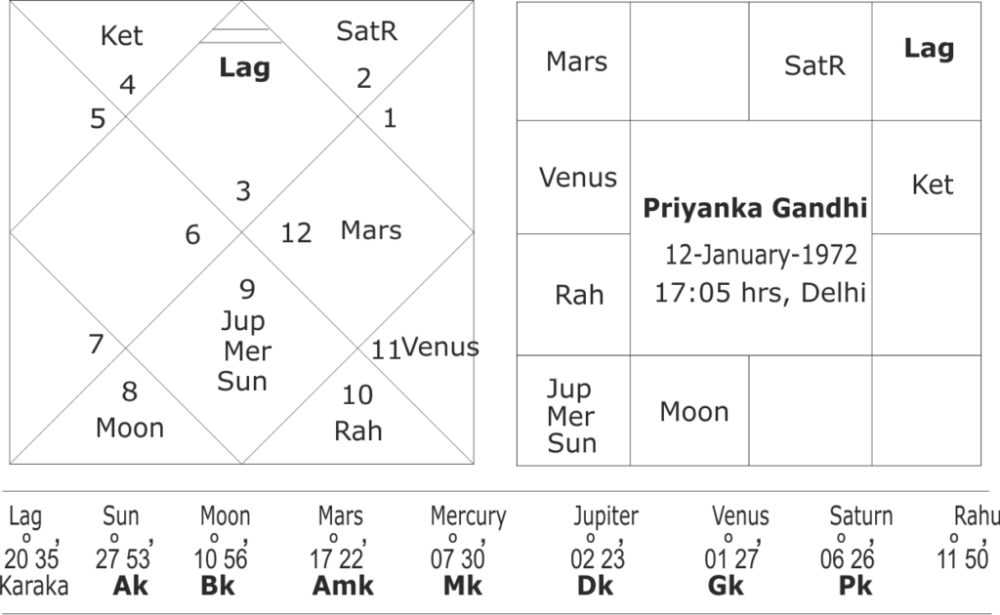 The conjunction of the ascendant and the tenth house in the seventh house, with which the Sun is in its own constellation, the rajasic planet Sun, gives a person a magnificent personality.

The horoscope is strengthened by the zodiac exchange of Shani and Venus, which also creates Rajyog. However, because it is also a lord of the 12th and 8th houses, it also indicates faulty.

But according to sage Parashar, if the Moon is in affliction and the RajYoga is not formed by the Moon, then RajYoga formed by the Lagna becomes fruitless. And Rahu Ketu in the 2-8  house indicates inner suffering.

now she is going through Venus Mercury Rahu Dasha Venus Mercury position is good but not formed  a strong Raja Yoga, as I mentioned above and Third Level Dasha Rahu not favorable for her

In fact, Shukra Mahadasha is not very favorable for her when Surya Mahadasha will occur in March 2024 which shows a more powerful position.

He was appointed as the Chief Minister on 26 March 2017 after the Bharatiya Janata Party (BJP) won the 2017 state assembly elections, in which he was a prominent campaigner. He has been a Member of Parliament from Gorakhpur constituency, Uttar Pradesh for five consecutive terms since 1998.

Adityanath is also the mahant or head priest of the Gorakhnath Math, a Hindu temple in Gorakhpur, a position he has held since the death of his spiritual “father”, Mahant Avaidyanath, in September 2014. He is also the founder of Hindu Yuva Vahini. , a Hindu nationalist organization. He has a Hindutva nationalist and a right-wing populist image.

I have received this data through my astrologer friend

If the Moon is in the seventh house, on which Saturn is aspected from the tenth house, which is occupied by Mercury and the Sun, a person is a Hatha yogi, a determined person with the ability to crush the enemy. The connection of the 5th, 4th, and 10th lords is making the Simhasana yoga(the throne)

During the election, the Ketu-Guru-Mercury Dasha of Yogi Ji will run, the planet Jupiter is involved in Sihasan Yoga and Buddha is doing yoga in the tenth house with Sun and Saturn as well as the lord of attainment.

Although Jupiter in Mool Nakshatra which is situated in the 12th house shows some weakness, Ketu is aspected by Saturn and is receiving the energy of powerful yoga formed in the tenth house.

Although this conjunction of Jupiter Ketu is being formed in the 8th house in the Dasamsa chart, it indicates internal weakness or internal conspiracy, however, his birth time is not clear, so I will give preference to ‘Rasi equivalent’ Dasamsa.

Mahadashanath and pratyaeterdashanath in dashmansha in Aries sign which is the 9th house of Lagna chart it shows he would manage again this time to be c.m of up

After a brief analysis of all the four horoscopes, Yogi Adityanath‘s horoscope is showing the strongest position, so we can expect that Yogi will be the next Chief Minister of UP but this time his path will not be easy.

Election issues are different, but achieving power is a common goal for all.